Baka to Test to Shoukanjuu Wiki
Register
Don't have an account?
Sign In
Advertisement
in: Characters, Fumizuki Academy Students, Year 2 Students,
and 6 more

Yuuji Sakamoto (坂本 雄二 Sakamoto Yuuji) is the deuteragonist of the Baka to Test to Shoukanjuu series. He is Class 2-F's Representative at Fumizuki Academy and is Akihisa Yoshii's best friend.

It is implied that he is actually smarter than the rest of his fellow peers as he is the one who plans all the tactics and strategies in every battle (it was also mentioned in the light novels that his learning ability was vastly higher than Shouko when they were in elementary school).

After the tournament in Volume 2, he acquires a platinum bracelet which allows him to summon a summoning field, but at the cost of some points and not being able to summon for the duration of the summoning field. He is also a brilliant tactician and strategist, being able to defeat all other classes and even gives Class 2-A a hard time through a combination of psychological warfare and the effective use of his classmates' abilities. 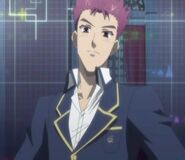 Yuuji has a laid-back attitude, which led him to not study at all for the placement test and, in turn, become part of Class F. However, after Shouko beat him in an elementary history test, he is shown to be pulling his socks up as his grades were improved by leaps and bounds. Yuuji also seems to have some cowardly and sadistic instincts, often bullying Akihisa Yoshii. However, he can also be kinder and compassionate (shown when he beat up the Tokonatsu duo and fighting with a guy for offending Shouko as well as saving Akihisa from bullies during the Cultural Festival)

In volume 1, his strategies and tactics had helped class F to attain victory after victory, until the duels with class A, which he overestimated his ability in an elementary school level Japanese history. Yuuji was once known as a child prodigy in his childhood. The only two reasons why he ended up in class F was because he did not study at all and he holds the strong belief that grades are not everything. However, due to the consequences he 'suffered' from his defeat from Shouko Kirishima, his childhood friend and also the smartest student from class A, he became motivated to study again, and in the later volumes, his Shoukanjuu became reasonably strong in just a few months due to his test scores improving by leaps and bounds. In the OVA, it is implied that he must study or else he will get married to Shouko immediately.

In light novel volume 10, his chance to win against class A has become 100% succeeded until his battle was interrupted by the principal and the main brain, Takashiro, so the battle was cancelled with a draw.

In the light novel 12.5 After Story, Yuuji is now in Class 3-A and is the President of the Disciplinary Council, with Toshimitsu Kubo as the Vice President.

His avatar wears an outfit that makes it look like a punk; an opened white, long-sleeved coat reaching up to its knees with a Class F badge on its collar and long, white pants held by a simple belt. Yuuji's avatar is armed with brass knuckles, with three spikes on each hand.

During Test Run, his shoukanjuu is just like the others. Making him tied up by Shouko as the result.

His upgraded version is just like the others with a picture of Dragon on the back side of the coat and a bat.

During Future Teller Test Run, his shoukanjuu become an adult version of him, dressed as a masochist, which embarrassed Yuuji so much, he canceled the shoukanjuu in the blink of an eye.

Community content is available under CC-BY-SA unless otherwise noted.