Mr. Hasegawa (長谷川さん Hasegawa-san) is a minor character in the Baka to Test to Shoukanjuu series. He is a Mathematics teacher in Fumizuki Academy.

In the anime adaptation, he supervises the first Summoner Test War declared by Class 2-F after they abduct him while he was on his way to Class 2-E.

He later appears in the war against F and D as the supervisor before he is kidnapped by some of the D kids.

He also appears in season 2 along with all the other teachers, protecting the girl's bath rooms. 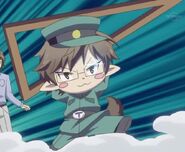 Mr. Hasegawa's Summoned Being, as seen in the anime adaptation

Community content is available under CC-BY-SA unless otherwise noted.
Advertisement