Kaoru Toudou (藤堂 カヲル Tōdō Kaoru), also called Baba (lit. "old witch" and also called "old hag") by Class 2-F, is a recurring character in the Baka to Test to Shoukanjuu series. She is the Principal of Fumizuki Academy.

She pays strict attention to compliance with the rules at her educational institution, specifically the modalities of the Summoner Test Wars. At first glance, she looks cool, reserved and conservative.

Most of the time she leaves the daily operations to the teachers, with Youko Takahashi and Souichi Nishimura relaying problems directly to her, and mixes in the struggle between the classes.

She always grins if she has a trick under her sleeve. She creates the Treasure Hunting Orienteering Competition where Akihisa Yoshii claims the Prototype Bracelet, and gives him permission to have a rematch with Class 2-A after Class 2-F is defeated for the second time (although it is not a Summoner Test War but a Test Showdown with a Sudden Death rule). In the anime, her name isn't spoken or mentioned due to the fact that she is the principal of the school. All students and teachers only refer to her as "Principal".

She also makes her appearance in Baka Test Shoukanjuu Portable as a random card and in the storyline as well. When the player gets her card, she'll appears to either help the player (e.g.- giving extra money) or give trouble to the player (e.g.- reduce the marks). 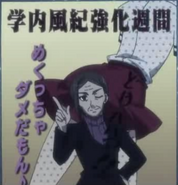 Kaoru on a wall poster in Fumizuki Academy, as seen in Season 1 Episode 11

Community content is available under CC-BY-SA unless otherwise noted.
Advertisement