Fee the fox is a minor character of Baka and Test series. They first make appearance when Hazuki lost her Fee strap by the road,[1] and also offered as one of the prizes in the orienteering competition.

They are also the official mascot for Kisaragi Grand Park, where Akihisa, Himeji and Shimada donned the costume to celebrate Yuuji and Shouko for winning the grand ticket. [2]

Fee and Noin dancing to the music 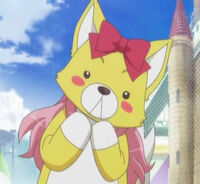 Himeji in Fee costume
Add a photo to this gallery

Retrieved from "https://bakatotest.fandom.com/wiki/Fee,_Noin,_Ein?oldid=11365"
Community content is available under CC-BY-SA unless otherwise noted.