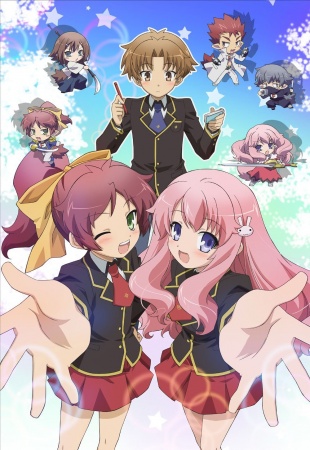 Baka to Test to Shoukanjuu (バカとテストと召喚獣, Baka to Tesuto to Shoukanjuu) Idiots, Tests, and Summoned Beasts) was originally a light novel series by Kenji Inoue and later spread to become an anime series and a manga series. Fumizuki Academy is the place at which this story takes place, a school where the staff rigidly divides the students based on the results of their academic scores.

At the start of the school, students are academically sorted by their entrance exam test scores. The higher the grades, the higher the class, and the better the facilities and benefits. In this case, Class A is filled with the highest-scoring students; therefore, their classroom is filled with many prestigious items (air conditioners, fancy seats, huge spaces, etc.), while the state of Class F is the complete opposite of that, having the "bottom of the barrel" amenities.

This academy has something special, a system and technology where all the students can call forth Summoned Beings (Shoukanjuu (Summoned Beings)). These Beings are used for battles, where the students tests become the being's power level, between the classes so to capture the facilities of opposing classroom, or downgrade them. Since Class A is filled with prodigies, they all have strong Summoned Beings, while Class F has drastically weak ones in comparison. These beings are supplied in health by the matter of knowledge (their last test score) in a certain subject. Points vary and could even be supplied greatly in an F student when calling a battle.

The main story is about Akihisa Yoshii, the main protagonist, along with his friends and follow their daily school life and their struggle to beat the other classes and to gain Class A's facilities.

Start a Discussion Discussions about Baka to Test to Shoukanjuu