Baka to Test to Shoukanjuu Wiki
Start a Wiki

What's on your mind?

I don't know if it is just me but I felt like Minami liked Akihisa from episode one.

Heya, I just created a server for Baka to test active fan

(edited by A Fandom user)
Baka to Test to Shoukanjuu

Welcome fan of the show. I am currently working on a top down RPG for Android/IOS about the anime. I want to ask you what's your opinion about in general? Have any ideas for the project: quests, items, skills... Or maybe we can discuss the battle system. real-time vs turn-based. Here is a quick peek: http://imgur.com/a/Q5QkJ

On the "Age" row in his character info table, what does it mean by "actual?"

(edited by A Fandom user)

And i'm creted better wiki logo for this wiki

honsetly i really want to like this anime and the fandom, but i cant. i watched it when i was younger, and i loved it because i couldn't understand much. but as i've aged, i've realized how transphobic it is. the fandom is especially transphobic. i mean??? look at some of these comments

" i think that instead of "HE" it should just be "hideyoshi""

"does hideyoshi have a penis?"

like. please stop the transphobia lmao. his gender identity shouldnt be a joke to everyone. it's seriously upsetting to read all of this

I feel like, instead of HE, hideyoshi should be referred to  HIDEYOSHI on the wikia......

I made a Straw Poll for votes on favorite Baka & Test characters. Feel free to vote if you want. Choosing whether or not to tell people your vote is entirely optional.

My vote is Hideyoshi Kinoshita.

Yo. This is Arvee100smart, the admin of BT. I'm here to discuss something about

From these past years, I am wondering if the Season 3 of Baka to Test is still possible; since the last episode of the 2nd Season aired last 2011.

Now, let me say that Baka To Test has still possibilitiy of having a 3rd Season.

Now, why I bring up this you say? You see, Working!!! Season 3 will be premiered on July 2015. As you notice, the year sequels doesn't matter. The popularity of the anime is.

Many I think already know when I typed those 4 words. Yep. Baka To Test's Light Novel officially ended it's plot. And what does that means? Well, there is no limitation now. Now that the novel is completed (the plotline I mean), Silver Link can make the remaining stories to be animated, freely. We just have to wait until they announce it then T.T

Nobody cares about the manga, in fact that the manga is the most updated among of them all. That's right. Unlike other animes that came from LN that was then sterilized to manga, our manga is very active. In case, the Volume 12 of the manga is about the Occult Versions or something. xD.

What does the manga has something to do with the 3rd season you say? You see, for popularity. If the publishers keep publishing the manga up until the final, the readers will keep on rising of course. And of course what could happen then? Season 3 :P

Just kidding, lol. I don't know what the content says, but my intuition says so. HAHA.

(edited by administrators)
Baka to Test to Shoukanjuu

December coming up! Do you want to have winter theme for Baka to Test to Shoukanjuu Wiki? Give your suggestions and opinions on how to celebrate our winter holidays together. Either you want it snowing, wintery look of the site, just anything and let us know!

Well, I came across some duplicate wikis on Baka to Test. While there's no any rule about creating duplicate wikis generally on Wikia, but starting one from scratch really hard. It takes a lot to work the way up, harder still if only one person doing it. We're not complete here either, but at least we already have some image database to use.

Other thing, the creation of other duplicate wiki, is because of the strict regulation here. We do allow comments here, but no using of cursing/sexist etc...just be polite. Yes, the series does have pervert moments, but that doesn't mean we allow obscenity or profanity in this wiki.

Mostly, every misunderstanding can be resolved by having some conversation. The duplicate wiki I saw, I believe the user/founder really misunderstood here, and instead of facing it, (s)he went and create another wiki.

Seriously, if any of you are not satisfied, just say it out here, I'm not gonna eat you. I'm not crazy about blocking others either (just maybe for the obvious spammers/vandals), that's what special about wiki, building a community by discussing everything. If no one giving feedback to the admins, we won't know your opinion(s), and finally it will just seems to be admins having the final say to everything. We're not dictators here.

Found great portraits of the characters from the official site of Enterbrain: 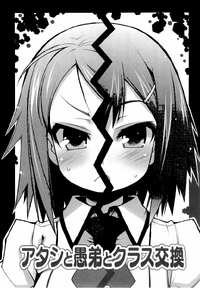 Internet freedom, that's the word nowadays. But, some cable companies want to make profit by slowing your site down, even Wikia!! Will you fight for internet freedom? Let your opinion(s) be heard here.

Ah, the shop. It has moved here, on this wikia. The place where you could buy all your destruction needs to punish traitors. This is what we've got for sale this week!

Finally, my favorite item on sale right now, the Akihisa-Yoshii-Destroyer, being able to crush an idiot's back with ease. For you all, 3,879,689.95 yen.

Come on down, and buy your dream weapon!

Okay, so this is totally unrelated to Baka to Test, but we all love pokemons! I'm currently playing Emerald, just getting ready to battle the Elite Four, woohoo!

Who do you think should be with? Akihisa x Minami or Akihisa x Mizuki. Or even Akihisa x Kubo?! Erm...what if Akihisa x Yuuji? Well since we all know that's not really that off topic in Baka to Test...

In accordance with the Image Policy on Baka to Test to Shoukanjuu Wiki, images with random/poor filename are no longer uploadable on this wiki. Example of poor filenames are as such:

If you are seeing permission error when uploading image(s) with this kind of poor filename, please rename the image into a proper one(s). Example of proper filename:

As for the existing images with poor filename, any user can help improving by adding the Poor filename category.

Further info on adding/creating new category(s) for image file can be read from here.

Help us grow Baka to Test to Shoukanjuu Wiki

3 Posts
New on Baka to Test to Shoukanjuu Wiki